I just read an article entitled “Why Having Kids is Foolish”.

All parents know that having kids is a blessing — except when it’s a nightmare of screaming fits, diapers, runny noses, wars over bedtimes and homework and clothes. To say nothing of bills too numerous to list. Some economists have argued that having kids is an economically silly investment; after all, it’s cheaper to hire end-of-life care than to raise a child. Now comes new research showing that having kids is not only financially foolish but that kids literally make parents delusional.

The article goes on argue that parents delude themselves into idealizing the emotional rewards of parenthood to rationalize the financial cost.  It explains how parents tend to be angrier, more depressed and more stressed out than non-parents.

And I’m thinking, lovers are that way too.  Love anyone deeply and there will be regular episodes of anger, depression and stress.  Love complicates things.  I guess by the logic of this article it could also be argued that love of any kind is a delusion (except self-love).

My children are still very young, but it is not difficult to see how having kids requires significant sacrifice and self-denial.  My daughter was colicky and cried almost non-stop during her second month.  It was stressful: my wife and I argued more during that month than the rest of our seven years of marriage combined. 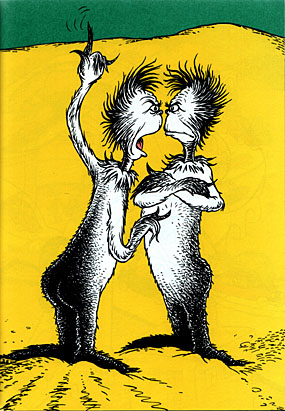 According to the article, the stress isn’t worth it.  We only tell ourselves that it is – it’s nature’s trick to keep us propagating our genes.  If we sane and clear-headed, we would realize that kids cramp our style.

Or is it love that cramps our style?  As a pastor, I’ve watched plenty of young people who I’ve invested in make foolish, self-destructive decisions. Watching students I love hurt themselves and those around them can make me angry and depressed like nothing else.

I’m sure there are any number of occupations that would allow me to avoid this kind of personal investment and heartbreak.

But I don’t want them.

Why? Because the very act of self-giving enlarges the soul in a way that can’t be quantified in a psychological study.

I’m not saying that a person can’t be fully alive without having kids.  But if you avoid the things that cost you blood, sweat and tears, if you avoid anyone who could break your heart?  Your life will be empty.

The bottom line: if your goal is to live a comfortable life with little risk, few inconveniences and maximum self-gratification, then yes, having children is foolish.

So is getting married. And having deep friendships. And following Jesus. And serving the poor.  And fighting against injustice.

All of these things will profoundly complicate and inconvenience your life.

But luckily, you won’t pass on your genes.

Because the world needs people who know that life isn’t about all about them.

8 thoughts on “Why Having Kids is Foolish”