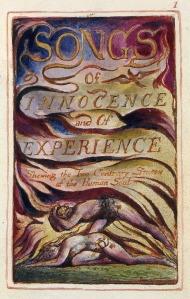 Tyger! Tyger! burning bright
In the forests of the night,
What immortal hand or eye
Could frame thy fearful symmetry?

In what distant deeps or skies
Burnt the fire of thine eyes?
On what wings dare he aspire?
What the hand dare seize the fire?

And what shoulder, & what art.
Could twist the sinews of thy heart?
And when thy heart began to beat,
What dread hand? & what dread feet?

What the hammer? what the chain?
In what furnace was thy brain?
What the anvil? what dread grasp
Dare its deadly terrors clasp?

When the stars threw down their spears,
And watered heaven with their tears,
Did he smile his work to see?
Did he who made the Lamb make thee?

Tyger! Tyger! burning bright
In the forests of the night,
What immortal hand or eye
Dare frame thy fearful symmetry?

Since Blake wrote Songs of Innocence before Songs of Experience, it would seem that he is saying that the tiger is the dominant state of the soul; the lamb represents an illusion of innocence.

In other words, God may seem meek and mild and lamb-like, but experience teaches us that we should not expect him to always behave so: his world includes stars that throw spears and tigers whose eyes burn with fury.

The naiveté of childhood must give way to chastened wisdom in apprehension of the way that the world really is.  To live wisely, with experience, is to live without the illusion that the world is a friendly place.

Now here’s the question: is reality so bleak?  In my opinion, Blake gets it two-thirds right.  The innocence that characterizes a child’s world must indeed give way to reality.  The Genesis story tells us that innocence was lost along with paradise, and we now find ourselves in a world of thorns and thistles.  But thorns and thistles are NOT the only reality.

My primary critique of Blake is that he compares the cute with the terrible but does not let the beautiful have a say.  A lamb is cute, and a tiger is terrible, but cute and terrible are not the only two categories, are they?

In the Christian story, these moments of beauty are not a return to innocence, but instead a glimpse of something else, something new.  While Blake can remember the innocence of Eden (act one) and muse on the terror of living in a broken world (act two), to make the story complete he needs a third act, a third set of poems: Songs of Redemption.

Redemption is the story’s third act, and without it, the universe seems either only cute or only terrible.  Redemption does not remove life’s pain or life’s mysteries; it does not tie everything in cute bows (that would be too lamb-like).

But it does give hope that “the gods are not angry”, that perhaps God is not like a lamb for its cuteness, but more like a lamb to the slaughter – suffering at the hands of a violent world, then rising again.

And perhaps this story, and the hope that comes with it, can only be seen through the eyes of a child, not the eyes of innocence, but of wonder.