Perhaps Tolkien’s most profound work on the subject of death is his “Athrabeth Finrod ah Andreth”, found in Morgoth’s Ring. (The Debate of Finrod and Andreth). In Athrabeth Tolkien puts high elf Finrod Felagund in dialogue with the wise woman Andreth.

The context of the debate is that Andreth’s mortality has kept her from being able to marry the elf Aegnor (Finrod’s brother). Finrod tells her that Aegnor truly loved her, but refused to be united with her for her own sake, so that she would not be forced to experience the pain of growing old while Aegnor lived ever-young. Her grief precipitates their discussion on the fate of men and Elves.

In a letter, Tolkien writes that “it is in any case clear that neither side was fully informed about the ultimate destiny of the other,” and the dialogue illustrates this well.

Finrod begins by asking Andreth to tell him why the brevity of human life brings them such grief when it is simply a part of their nature. Andreth replies that some say short-life was not always a part of human nature, but it has become so “through the malice of the Lord of the Darkness whom they do not name [Morgoth].”

After Death was imposed upon humanity, the fear of it plagued them, and they journeyed to Middle Earth in hopes of escaping it. To their great despair, they found that they had fled from the Shadow only to find themselves at Morgoth’s doorstep. Finrod replies that it is an error to confuse Death with Morgoth:

“But these two are not the same, Andreth. So I deem, or death would not be found at all in this world which he did not design but Another. Nay, death is but the name that we give to something that he has tainted, and it sounds therefore evil; but untainted its name would be good.”

Here again, we see a distinction between death in its original conception (as part of the natural order of the world) and death as twisted by evil. 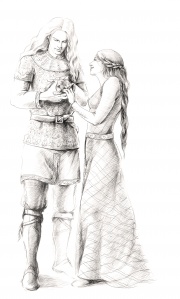 Andreth’s response is to ask what the Elves know of death, since even their deaths in battle are not really the end for them, whereas for humanity death is an inconsolable loss. No matter how a man lives, whether wisely or foolishly, death will catch him like a hunter, and there will be no returning (as there is for Elves, who can choose to come back).

Finrod grants her the point, but then informs her that even the Elves are not truly immortal, since their existence is bound up with the lifespan of Arda, which will not endure forever. The Elves know that the end will come, “and then we must die; we must perish utterly, it seems, for we belong to Arda…. And beyond that what?”

Andreth speaks similarly about the hope of men: “[We] have no certainty and no knowledge, only fears, or dreams in the dark”.

This brings us to our theme, the question of Hope. If both Men and Elves are ignorant of the end, is there any basis for Hope after Death? If so, Tolkien writes, it is a “Hope without guarantees”.

And yet, Finrod says that he believes that some greater work of Eru (God) is in the future, some supreme moment that has been ordained:

“as may a master in the telling of tales keep hidden the greatest moment until it comes in due course. It may be guessed at indeed, in some measure, by those of us who have listened with full heart and mind, but so the teller would wish.”

In other words, Finrod believes that he lives in a story-shaped world. And in the greatest of stories, the storyteller keeps the greatest moment, the redemptive moment veiled in uncertainty and suspense – until it is time. But those who have listened well may guess how the story might end.

So what is this master stroke? Andreth asks Finrod where he thinks the story will go, and Finrod replies: “I was thinking that by the Second Children [Men] we [Elves] might have been delivered from death.”

This means that Humanity, far from being second-class citizens of Middle Earth, may actually be instrumental in the redemption of the whole.