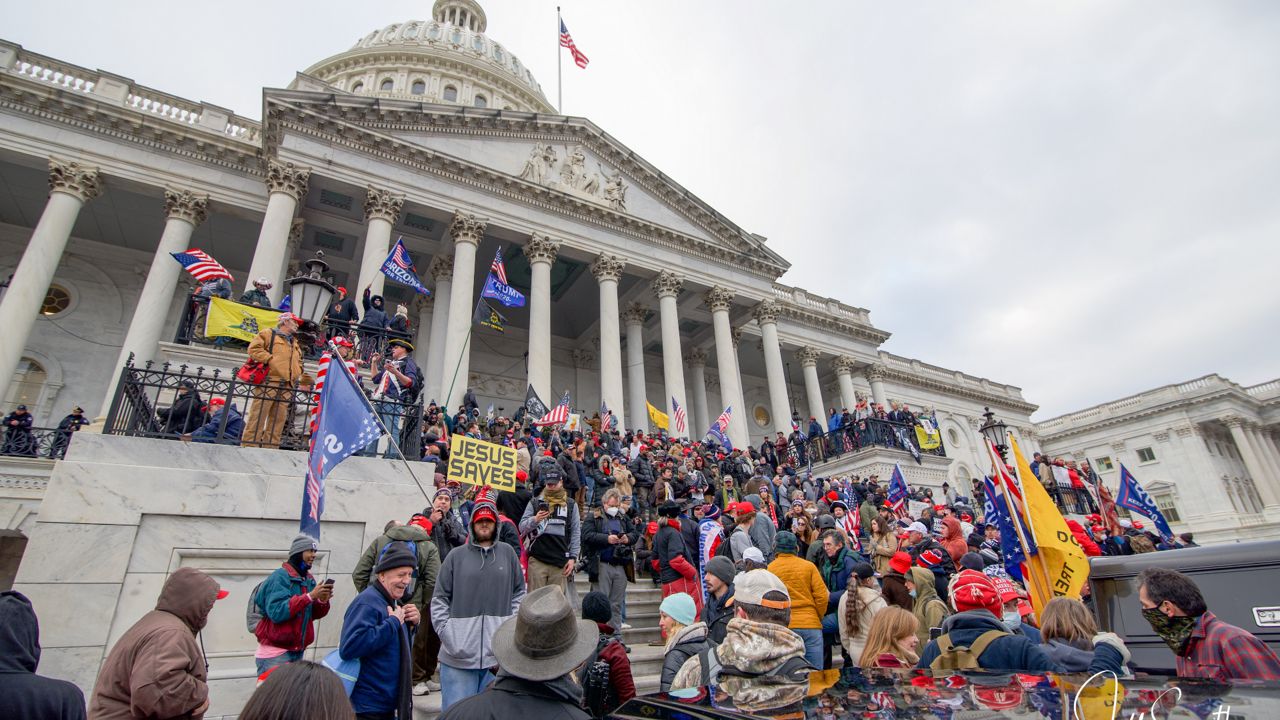 “Jesus Saves”: Fragments on the Storming of the Capitol

The last few days I had scheduled large blocks of time for a major writing project. But I can’t seem to write. Instead I find myself glued to the news. I normally do my best to moderate the amount of news I read: an email digest every morning, long-form journalism when I want to read further, no talking heads. But the events of this week have been a monumental tragedy from which I cannot seem to look away.

The image that I cannot quite seem to get out of my mind is of the person holding the sign “Jesus Saves” while storming the Capitol building.

Others have noticed this image as well (The link is to a tweet from the president of Midwestern Baptist Seminary, hardly a “leftist” voice)

This is not a Trump-centric post. I am content to let others state the obvious. Though I am reminded of the line from Duck Soup and An American Tale, spoken by Groucho Marx and Warren T. Rat: “who are you going to believe, me, or your own eyes?” But I guess the last year has more or less convinced me that argument only matters so much.

I want to focus instead on the line that I’ve heard all my life, the truth of which I cherish: “Jesus Saves.” But carried in this context – the storming of the capitol – I have all kinds of questions. I want to ask: from what does Jesus save? And for what purpose does Jesus save? And who exactly is Jesus saving? And how does Jesus save (i.e., what methods does Jesus employ?) But one of the problems with “bumper sticker” theology (theology that fits on a bumper sticker) is that it is allergic to nuance, leaving behind an empty cipher that can be filled with whatever meaning we want.

I’ve seen more than one person juxtapose the image above with another, even more chilling image:

I’m not necessarily saying there is a direct equivalence between the two images. But there is a family resemblance. This sign was carried alongside other symbols with more explicitly racist and anti-Semitic messages. There were flags and nooses. There were t-shirts bearing the name “Camp Auschwitz” or “6MWNE – 6 million was not enough.” In any case, both images fill me with grief and anger.

I am not an expert on politics, economics, or racial justice. I do my best to listen and learn from others who are. But I have devoted my life to studying the Scriptures and reflecting with the church on what it means to follow Jesus. And I have spent a lot of time reflecting on and writing about the church’s relationship with culture. So here are the fragmentary thoughts that have been rising to the surface. They revolve around three themes: biblicism, syncretism, nationalism.

Biblicism: Biblical authority + biblical illiteracy is incredibly dangerous. Without biblical literacy, biblical authority becomes a bludgeon to smash the opposition. We pontificate without having done the work of wrestling with the text, learning from the church across time and space, and interpreting proof-texts in light of the canonical whole. Scripture has been used to justify evil of every kind. That doesn’t mean we abandon the Bible; it does mean we have to learn to read it well and apply it to ourselves without weaponizing its verses against others.

Syncretism: Syncretism is the mixing faith and culture, mistaking one for the other. The first part – mixing – is simply part of being human; faith and culture will always be intermingled. It is when we make the second move – mistaking – that we get things like “Christian nationalism.” We must name our cultural idolatries that lead us to syncretism. But we must do so with humility, self-examination, and in conversation with the larger church, because it is always easier for us to see syncretism in someone else’s faith than in our own. As brother Esau McCaulley reminds us:

Nationalism: I am very thankful to live in America. But biblically speaking, America is not a very consequential country. This is not a slight against America, it is just a way of saying that our country is no more “special” than any other nation. In Scripture, no nations are of ultimate consequence. As Isaiah says, “Surely the nations are like a drop in a bucket; they are regarded as dust on the scales; he weighs the islands as though they were fine dust” (40:15). What is of consequence, biblically speaking, is the kingdom of God, which transcends national and ethnic boundaries, whose participants are represented in the book of Revelation as a blood-washed multitude from every tribe, tongue, and nation (5:8).

That doesn’t mean we give up our ethnic or national histories. Indeed, the kings of the earth carry their particular glories into the eternal city (Rev. 21:24-26). But it does mean that almost all of us are outsiders who have graciously been welcomed in to someone else’s story (e.g. represented in the first two-thirds of the Bible). We are not insiders with lots of rights to claim. We are outsiders from the highways and byways who have no right to be at God’s table (Eph. 2:11-13). This should always lead us to astonishment rather than entitlement. It should also lead us to move towards those on the margins, towards outsiders. The harshest words from the prophets and from Jesus were always for the “righteous insiders” (see Matt. 23).

I suppose I’m not really trying to convince anyone with this piece, so much as work out my own thoughts in a semi-coherent way. But in light of everything, here are my hopes as I approach this new year: