The Paleo Experiment (3.5): A Christian Vision of Food

By Justin BaileyMarch 9, 2011No Comments

I had started to write a post on this, but realized that I was almost paraphrasing an essay that I had read by a guy named Douglas Wilson.  He is a much better writer, and so I have simply reproduced an edited version of his essay.  I am mainly posting it to demonstrate how my Christian worldview shapes the way I think of food.  If you’re not interested, pass on by.  There will be an original post in a couple of days.

Think for a moment what God could have done with food. He could have designed a universe in which some sort of fuel was necessary, but where the (entirely superfluous) function of taste was missing. He could have provided us with abundant sources of nutrition, but which had the ethos of cold, shapeless oatmeal. No taste anywhere. Bleh. 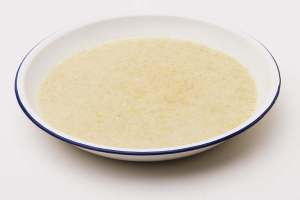 Or He could have given us food that had slight variations or degrees of refinement, like gasoline. We could have had super premium oatmeal, which was more gruel-like, and then premium, like cream of wheat, and then regular, which would be like oatmeal, with the texture and everything. But still, nothing that had taste. No brown sugar.

What kind of God created taste? Not just the function of taste—because He could have done that and only provided one or two tastes—but the riot of tastes, the pandemonium of tastes, the bedlam of tastes that we actually have. Think for a moment what is actually going on out there. We have, just to take a small sampler, watermelon, orange, cinnamon, bacon, walnut, beans, make that 482 different kinds of beans, grapes, salmon, sharp cheese, honey, butter, and nutmeg. If we were to catalog all the tastes in the world, straight out of nature, we are no doubt surpassing tens of thousands of distinct, identifiable tastes.

And God looked on the creation and said that it was very good, but He then wanted to expand on this good start. So in the creation mandate, He required that sons of Adam and daughters of Eve learn how to cook. This meant that they were to go out into the world, find all those tastes, and then start playing with them. What goes with what? And when you mix this with that, what happens? What happens if you mix a little more of this, but then set the whole thing on fire? Wait, I know. Let’s put it in a pan, melt some butter in the pan, and then put it on the fire.

And by this means, the thousands of tastes became millions of tastes. Recognizable and distinct tastes. But what for?

What kind of God would create a world in which literally millions of very different pleasures can occur in your mouth, and for no apparent functional reason?  This is a God who loves pleasure, and is willing to throw those pleasures around His universe with wild abandon. He insisted on creating beings who are capable of enjoying all these sensations, and, because they have eternity in their hearts, they will pursue tinkering around with a foul tasting bean until they figure out how to get chocolate out of it.

For far too long, discussions about the mystery of the Holy Trinity have been assumed to be the province of theologians with fifty-pound heads. But there are two questions that all of us can ask, and we ought to ask them far more frequently—and in the presence of our food. Those questions are, “Who would do this?” and “What must He be like?”

When should we ask these questions? The times will vary, but we ought to remember the questions every time we say grace, because this is why we are saying grace.

When do we recall the questions? Whenever we eat a cookie, and then down a tall glass of cold milk. When the hot gravy goes on the cheese potatoes. When we are sitting on the lawn on a summer evening, spitting watermelon seeds. When the butter melts on the corn on the cob just right. When we pour lemonade and iced tea together, half and half. When the green beans are cooked together with pistachio nuts. Honey butter. Homemade fudge sauce on store bought ice cream.

Who would do this? What must He be like?

Question: According to the Christian view, God wants us to enjoy food.  He also wants us to take care of our bodies.  How do we hold these two together?