We are in the midst of Snowpocalypse 2012, and so I used the extra time to do some blogging.  I am starting a new series that is adapted from something I wrote several years ago.  It is literature and philosophy-oriented, so if you’re not interested, by all means, pass on by…

I fell in love with the Chronicles of Narnia at an early age.  As I grow older and make regular rounds through the books, the stories continue to compel me.  They do so, however, in new ways: a word or a phrase will jump out at me and I will be surprised that I did not see it before. 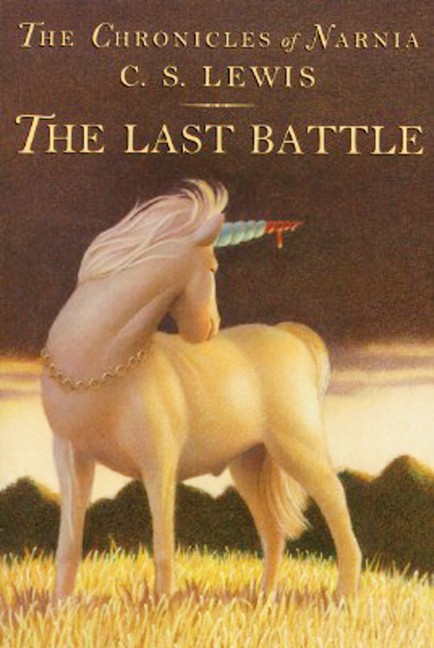 [yes, that is a unicorn, but notice also the blood dripping from its horn]

The surprise in this case was punctuated by the fact that it came while I was listening to the book that I have probably read the most times: The Last Battle.  Like many readers, my favorite parts of the Narnia series have always been those parts in which Aslan shows up, and near the end of this book, King Tirian, the hero of the story, sees Aslan for the first time.  And Lewis writes:

The sweet air grew suddenly sweeter.  A brightness flashed behind them.  All turned.  Tirian turned last because he was afraid.  There stood his heart’s desire, huge and real, the golden Lion, Aslan himself…

I am sure that I had read that passage at least thirty times before that moment of hearing it spoken, but as soon as the narrator pronounced the word “real”, unlooked-for tears came to my eyes.  I thought, why are my eyes watering?

Frederick Buechner has said that when we encounter unexpected tears, at those moments we should pay particular attention to what’s going on in our soul.

So I decided to go back through the Chronicles to see if I could find this word, “real” in other descriptions of Aslan. Finding at least two other places immediately led me to wonder why Lewis consistently chose this word, and what it was about it that resonated with me so deeply.

I think what I was experiencing was a taste of the Christian hope, specifically of the moment when hope is realized, when faith becomes sight, and longing is satisfied with reality.

Indeed, in order for hope to be more than wishful thinking, a real object must exist that can satisfy the hope.

But that is the question: what do we mean when we say that something is real?  What did Lewis mean by “real”, and why was it so important for him to describe Aslan in this way?

In this series of blog posts, which will lean heavily on Lewis and Tolkien, that’s what I want to explore.  I hope you enjoy!