(This post will conclude the series! I hope it has been enjoyable.)

This series began with a reflection on Lewis’ description of Aslan as real, one which brought unexpected tears to my eyes. So why did this happen, and what is Lewis up to?

What I think Lewis is doing in describing Aslan as real is giving us a glimpse of the same surprise of joy that he himself encountered in coming to faith.

All believers have experienced a taste of the initial surprise when we find Christ and put our faith in him, but an even greater surprise awaits.  It is, however, a different kind of surprise.  It is the surprise of finding out what we already believed was really true, and we have not been fools for believing it.  This kind of surprise is depicted in Caspian’s nurse on her deathbed, when Aslan breaks in and surprises her (from Prince Caspian):

And there, still in her bed, though her bed was now in the open air, lay a little woman who looked as if she had dwarf blood in her.  She was at death’s door, but when she opened her eyes and saw the bright hairy head of the lion staring into her face she did not scream or faint.  She said, ‘Oh Aslan! I knew it was true.  I’ve been waiting for this all my life.  Have you come to take me away?’

There is something striking about this scene: the nurse is portrayed as unafraid, symbolic for her unflinching faith.  But one does not say, “I knew it was true” unless you have had occasion to doubt.

Here is a faith that is tinged with doubt, or perhaps more appropriately, hope.  Hope is not certainty, or as the apostle put it, hope that is seen is not hope.  Faith will always be tinged with doubt, such that when we see Christ, we will say, “I knew it was true!” 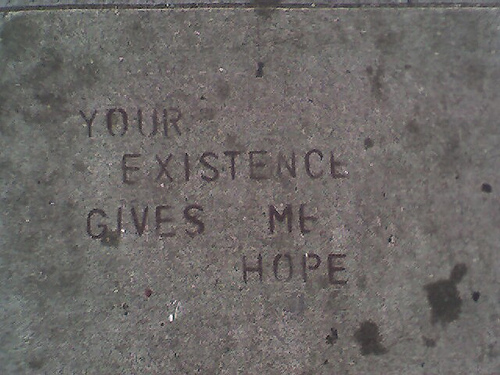 No less than Tirian, Jill or Lucy, Aslan (of course I mean the person he represents) is my heart’s desire.  But my own struggles with faith and doubt make me wonder if my heart’s desire is just a delusion.  Jesus has been misrepresented and counterfeited.  It is easy enough to spot the donkey in the lion’s skin.  But is there a real thing, a real Jesus?

The Christian hope tells me that the answer is yes.  That is why tears came to my eyes. Lewis, through the use of one adjective, perfectly placed, gave me a taste of Joy.

Jesus is real. And by God’s grace, I will become real as well.