[Apologies for the lull in posting! Continuing the series…]

Before Lewis met Tolkein, he writes in his autobiography that although he loved his imaginative life, he did not believe that the characters in his imaginary world were real: “I never mistook imagination for reality.”

Indeed, when Lewis met Tolkein, the two would argue intensely over the nature of myths.  Lewis called them “lies breathed through silver”, beautiful, but untrue; Tolkein argued that while they might be fictional, that did not make them untrue.  In fact, myths carried profound spiritual truth, pointing to deeper realities.

Their disagreement led Tolkein to write a poem for Lewis, addressed “Philomythus to Misomythus” (myth-lover to myth hater).   Tolkein here vocalizes Lewis’ argument that myths are just stories we tell ourselves to escape from the harsh facts of reality: “Yes! ‘wish-fulfillment dreams’ we spin to cheat / our timid hearts and ugly Fact defeat!”  But Tolkein’s response is to ask: “Whence came the wish, the power to dream?” 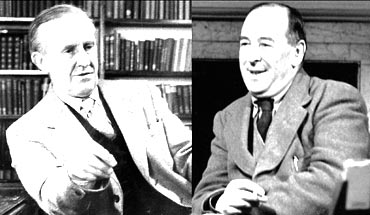 In other words, why is there such a universal experience of myth-making, of telling stories that point to things that we have never experienced but have only imagined?  Why tell stories at all?  Where does this desire, and the impulse to dream come from?

From Joseph Pearce’s biography of Tolkien:

Tolkien resumed, arguing that myths, far from being lies, were the best way of conveying truths which would otherwise be inexpressible. We have come from God, Tolkien argued, and inevitably the myths woven by us, though they contain error, reflect a splintered fragment of the true light, the eternal truth that is with God. Myths may be misguided, but they steer however shakily towards the true harbor, whereas materialistic ‘progress’ leads only to the abyss and to the power of evil.

Tolkein would show Lewis that metaphor and myth point us to a reality beyond our senses.  After his conversion, this would become one of Lewis’ most powerful arguments for the reality of another world, not immediately available to our senses, but real nonetheless.

Next: “This is what I’ve been looking for all my life.”